Some backers got a text message yesterday from the remind101 app. We learned a few things, I can update subscribers from my phone, but I’m limited to 120ish characters (similar to twitter). I can also attach almost any file type. I’ll probably grab a screenshot from the GPS tracking app as we go, or maybe a few photos from the road; launch and recovery etc.

We also played a quick game of ‘hide-and-seek’ with the payload in some deep woods trying to simulate a worst case scenario. We definitely learned a few things. It was fun and I’d like to play a few ’rounds’ again soon.

KF, a project backer, has an annual Black Friday camping trip at a small state park near here. He’s also one of the ‘technical advisors’ and an avid geocacher. This was the first time I’ve actually relinquished control of the payload to someone else and said: ‘Go hide this thing. Don’t tell me where it is. When you get back in 10-15 minutes, it’s game-on’. I know he can be tricky but I also know he would simulate a real world situation AND remember where he dropped the thing in the event we couldn’t find it. 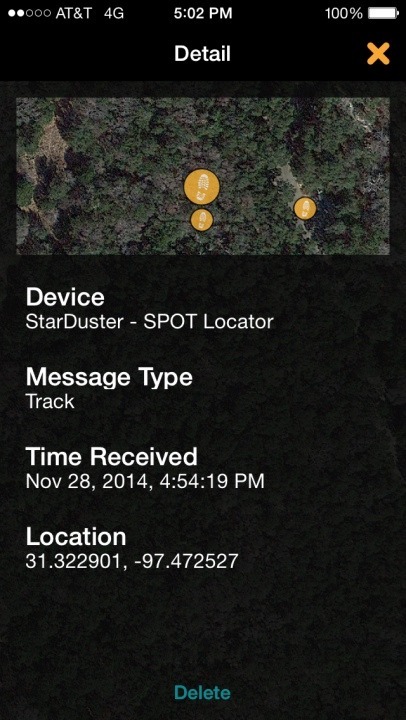 Dense tree coverage can delay the time the Spot locator calls home. We were getting updates every 5 minutes until he placed the payload under the base of a grove of trees. I didn’t panic but we stopped getting updates for 12-14 minutes. Once we got updates, they were regular but there was another 15-30 foot of error in the reporting. Not bad, but something to note.

The GPS reporting app gives lat/long down to 6 decimal places and uses google map imaging. What it doesn’t do is overlay where ‘you’ are on the map and it doesn’t provide a smooth way to import that over to either Apple maps or Google maps. It’s not horrible but they don’t even give you text that you can copy/paste. I could do it from the web interface but that’s cumbersome.

What does work is hand-entering those numbers over to a handheld Garmin GPS I’ve owned for a few years. The model I have take gps waypoints to 4 decimal places which is very close and still should put you in the same acre. A bonus side-effect, the Garmin works by gps and doesn’t rely on any cellular. If we can get a fix on the locator ‘in town’ through cellular on my phone, we can crash through the woods with coordinates in-hand as long as we are getting good enough line-of-sight to the GPS constellation.

On a good/bad note, we discovered the audio beacon isn’t enough as-is in densely wooded areas. On open ground it’s handy, it just doesn’t have the ‘legs’ where we were yesterday. I have a 105db siren that will blow the current buzzer out of the water but that means I’ll have to desolder and resolder a new part in. Leaving the on/off switch external to the payload looks even smarter now because that siren is going to get noticed and annoy anyone finding the payload before we do.